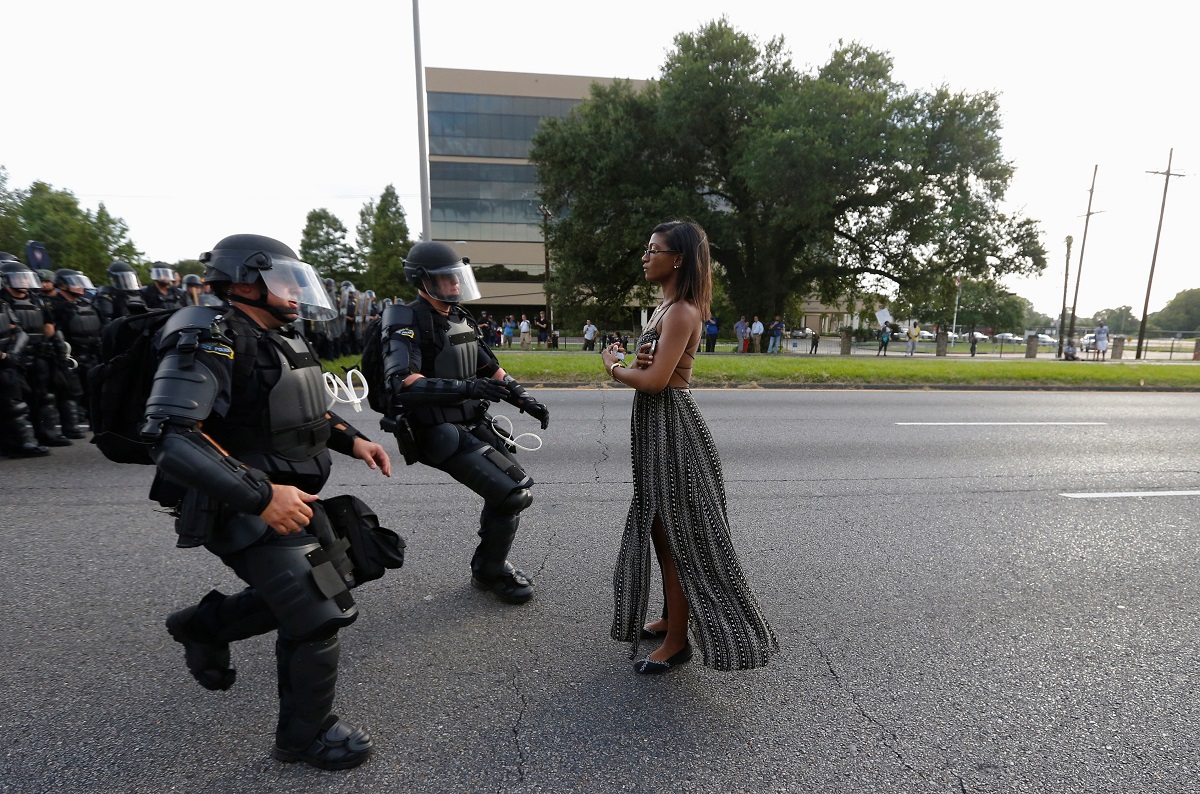 “This image of me protesting traveled around the world. I was there because the slaughter of our people by police officers had opened my eyes.” Ieshia Evans

From the front page:

I have over the last year, even begun to wonder if our language itself is traumatized.

To wonder if the words and speech that we use, is actually reflective of the trauma that is embedded in so much of the culture that we live in.

It would make sense, if you understand language and words not as something disembodied from experience but as vocalizations that are, at least meant to come from the heart and soul of who we are.

So as a result, the longer this culture lives in the denial and propagation of trauma and abuse, the further its language reflects that same level of disembodiment.

Even in this conversation, it would be easy for me to jump over the fact that the language I am using is not a language native to this land.

It would be easy to be a part of the dismissal, of the simple truth that our language is a colonial language that continues to pretend that there was no other language here when we arrived.

Easy to jump over how much trauma and abuse are embedded in the foundations of this culture.

It is also easy for many of us to forget that the language and culture, such as it is here, is largely divorced in the most extreme ways from the land and cultures that many of us came from. In my own case the severing of ties was so extreme that even though three of my grandparents were born in other lands, there is for all practical purposes no family connection to those lands.

This is an aspect of trauma culture that I am only just beginning to really let in.

It is maybe in this context, no surprise how difficult it is for all of us to communicate with each other. It is ironic really, because the technological means of communication surround us incessantly, everywhere and all the time.

Yet at the same time, our capacity to communicate has maybe never been so limited.

As a teacher there is an amazing familiarity with my use of a word and someone else then speaking about the same word with a completely different meaning.

The word vulnerability is one good example of this.

For some people, to be vulnerable, means literally to make oneself foolishly open to attack. While for others, the very same word can mean being in a sharing of the deepest part of who they are.

Who is right about what the word means?

Obviously, no one is right. Our language has itself been split into binaries. And like a dream, the only real meaning comes from stepping into each person’s experience of those words and what they mean to them.

Because of this, any true act of finding voice, of giving real meaning to the language we use is an act of healing trauma culture. It is an act of building a new culture, as words and language are building blocks of all culture, of all society, of all community.

In this way, finding voice bridges the gap between inner practice and social change.

It in fact, makes it possible to begin to undermine the split altogether. Because that split is a symptom of the deeper patterns of the dissociation of trauma culture which turns almost everything into binaries – inner work versus social change, vulnerability versus strength, male versus female, gay versus straight, sensuality versus sexuality, anger versus love – and on and on an on….

Being conscious of finding voice, of particularly learning to express the deeper voice that comes with a consciousness of trauma culture, is in and of itself a radical act of renewal.

Black people using the simple phrase “black lives matter” and standing against the watering down of that language with the truism “all lives matter”, opens a possibility for their experience of not having mattered, to come into consciousness in a way that has profound implications for this culture.

If the “all lives matter” movement has their way, we will not change as a culture.

We will not come into consciousness. We will instead continue to obfuscate, or worse, erase the experience of people of color within our society.

We will feed a dynamic that propagates racist abuse and the resultant trauma, while at the same time giving deeper roots to an intergenerational culture of white supremacy that stands by and at best silently allows that abuse or at worst carries it out.

Coming into consciousness requires us all to find our own deeper voice.

Speaking about the reality of trauma and abuse culture, expresses something that is in fact deeply denied in the mainstream of this society.

The alienation that so many of us feel, can only survive if we are alienated from our own expression, from our own voice. We can speak of love and grace all we want but without an acknowledgment of how much that love has been betrayed, those words become meaningless.

We are as human beings built and evolved on the love that is inherent in our need and long term dependence as children.

If you take away the meaning of the word love.

If you make it just one more thing up for sale, for use and for abuse, then we have lost ourselves in the most profound way possible. If we are not at least in a search for some deeper understanding of love, than what the mainstream of this culture offers up, then surely we have already lost the battle for the survival of our species and our place on this planet.

I would argue that finding voice is a part of that search for meaning.

A core part of how we have a chance to begin to learn to reconnect with ourselves, with others, with this occupied land that we inhabit and with some experience of spirit or of deeper consciousness itself.

For me this is where I suspect the real possibility for an evolution/revolution in consciousness is possible.

We will not find meaning if we deny the trauma and abuse of this culture.

We can only find meaning if we find words for the truth of what has been lost. In that way speaking of violence against women or of any other oppression is an act of deep inner/spiritual practice. In that way acknowledging our own personal losses, opens the possibility for a deeper kind of love which makes it possible for us all to say no to trauma culture in our own way.

I don’t know how exactly that will evolve.

With love and respect,
Bill St.Cyr
From the land of the Abenaki Nation also known as Vermont

Please join me for this 3 month exploration of learning to hold space within ourselves and for each other. We will learn about and practice what it means to hold space, in the context of an understanding of trauma culture and an embodied return to an experience of love and grace. Both within our inner practice and in our engagement to the broader world of community and social justice…

Pricing is variable with an “almost free” option

From Trauma Culture to Embodied Consciousness

You have Successfully Subscribed!